Fishing on The River Naver

In 1988 the Estate purchased a half share in the Syre Estate by Strathnaver, Sutherland. This sporting estate owns two beats out of the six on the River Naver and the whole of Loch Naver.

To this a half share in the adjoining North Loch Naver Estate was added in 1992 and a further beat on the River Naver.

The Naver is recognised as one of Scotland’s finest salmon rivers and the Estate offers fishing to let together with two well-equipped lodges. 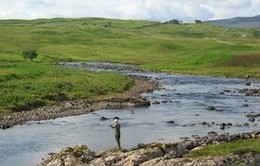